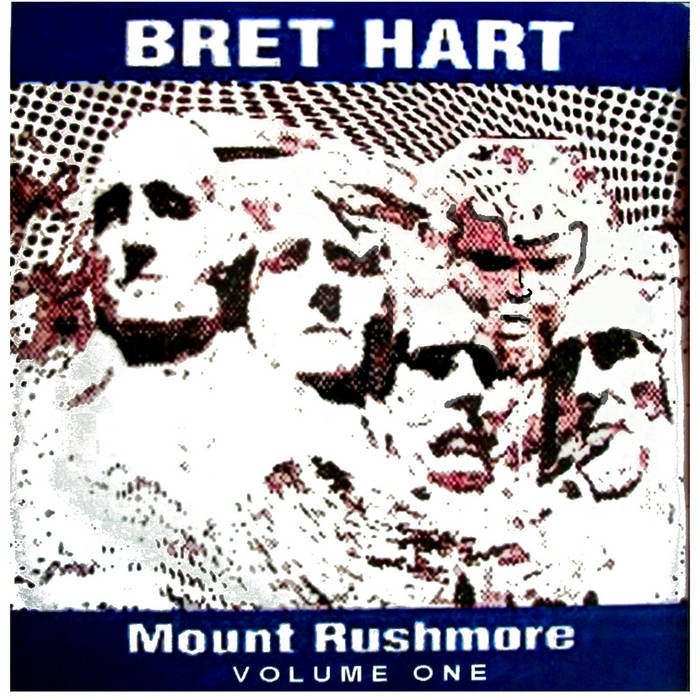 Bret Hart: MOUNT RUSHMORE 1 [1988 digital]
Songs:
ghost of Popeye
beets (and...)
incisor
ekaf slleb (v.1)
tote that bale!
her dead sister-in-law
twinkie
view of Seoul from a crowded highway
cooking a dog with a propane torch
slow bottom dwellers and refraction
jammin with an orphan kid
orphanage afterthought
these wires
pregnant rawhide lift-off
no, lick MY stickers off
well, blow me down!
he enters your dream, shivering
colliding (and...)
Kim Il-Sung
meeting a robber in one's home
some concluding commentary

////////////////////////////////////////////
REVIEWS
Bret Hart - "Mount Rushmore Volumes 1 & 2" (HipWorks 2001, originally self-released 1989 on O-Right Records)
From Aural Innovations #19 (April 2002)
"For those of you who have been following our coverage of Bret Hart's work in the past few issues, here's a couple tasty treats from Bret's past, plus some new music. The music on Mount Rushmore consists of the free-improv we've come to expect from Bret. There are fun and interesting sounds galore and numerous styles influence the music. While in the army, Bret was stationed in Korea for much of the 1980's and took advantage of his access to the variety of available instruments to acquire a bunch of them for himself. I hear a lot of interesting takes on the avant-rock/RIO school, though some travel down its more abstract hallways. Nice guitar work and loads of sounds I couldn't begin to identify, though Bret provides a laundry list of the instruments used, both Korean and Western. The guitar work is creatively varied and beautifully atonal. I noted in a couple other reviews, and it's also the case on Mount Rushmore Vol 1, that much of this reminds me of what Fred Frith was doing on his Gravity and Speechless albums. I also hear a few bits that remind me of Robert Fripp, but only in the most demented Bret Hart way.
There are also tracks with an ambient feel. Guitars and percussion are still prominent on these tunes, but the music communicates a floating sensation despite any other harshness that may be otherwise blurting about. And close listening also reveals several standard recognizable rock structures blended with the free-improv. But the real treat throughout the set, and what gives Mount Rushmore its own character, is the abundance of percussion instruments and the way they complement the guitars. Percussion is integral to these recordings and the clatter is clearly calculated. A lot of it has a playful childlike sound that reminds me of The Residents' Goosebump album, the one recorded with all Children's instruments. If there's any difference between Volumes 1 and 2 I suppose it's that Volume 2 has some of the most avant-garde and most melodic tunes of the set. Excellent music from the Hart Archives that will appeal to both free-improv and avant-prog fans, and, of course, to those who love all things freaky." - Jerry Kranitz
//////////////////////////
BRET HART: Mount Rushmore (3 C60 cassette set) Well, it's like this...Bret Hart--y'know, Brett Hart? He does this percussive guitar music. Yeah, it's been compared to Fred Frith. That sort of angular percussion, guitar jamming, strange and freaky, lots and lots of fun for the deranged. Fortunately, I'm deranged myself, so I can really go to town on this, otherwise unfathomable, three hour trip into guita-space-out-ville. Oriental percussion meets strange, distorted guitars as sounds of East and West meet to be trashed, thrashed, and tortured mercilessly. Your brain gets put through the wringer on this 'un, as all sorts of unimaginable bizarreness passes through your ears--assuming you can last through all six sides. This is one of those you-never-heard-that-instrument-played-that
-way, total strange-out, weird-muzical assaults. And I'm into it! - Dan Fioretti
///////////////////
BRET HART: Mount Rushmore (3 cassette set) A name recognized by most Lowlife readers offers an ambitious trio of cassettes recorded in strife-ridden Korea. Mount Rushmore is a more consistent and thoughtful collection of music produced in a shorter period of time (Sep.'88-Jan'89) than most avant-tapist produce in their "careers". Hart utilizes an organic-electronic approach to create his dissonant and melodic songscapes: guitars, Casio sampling, frying pans, boxes, bells, and a host of Korean instruments (including: hey-goom, pook, kweng-gwa-ri, chook-pee, and doh-doo-me-tole). A quick and all-too-ready list of references springs to mind (Hollis-Schwartz and Mick Karn, in particular). But, on the whole, the music here is singularly unique. It should be noted that six sides of Mount Rushmore demand a courteous and dedicated ear, to catch those moments when the various elements crystallize into musical coherence. Enough. Comes with a hand-stitched, canvas, Xerox-collage-infocommentary booklet. - Andy Pierce

Bandcamp Daily  your guide to the world of Bandcamp

Benji B talks about his new compilation ‘Deviation Classics’